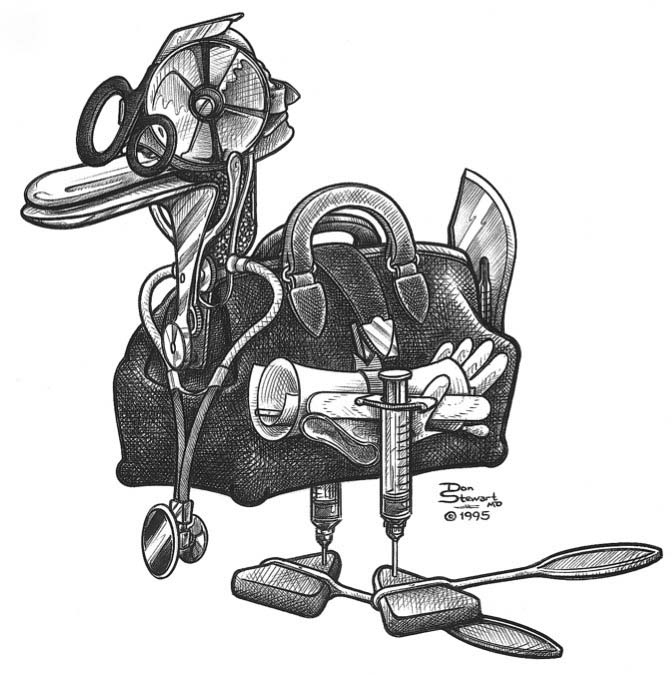 Three decades ago, early in my residency training I decided to shrug off the white coat, turned in my stethoscope, and disappeared into an art studio.

My mother died of cancer when I was five years old. Whether her frequent trips to the doctor’s office and the hospital made a lasting impression on me, or if some early desire to prevent suffering grew out of the experience, I don't know. What I do remember is telling everyone that I was going to be a doctor when I grew up.

That intention stayed with me through high school, college, and much of medical school. By the time I was ready to begin my surgical residency, however, the luster of medicine had paled, and my dream of being a surgeon began to disappear altogether.

Why did this happen? I can’t honestly say for certain. Perhaps I was too young, too self-centered, too idealistic. Perhaps my idea of compassionate medical care was influenced too much from popular television shows. Maybe medicine in the 1980s was changing too fast, dealing with too many practical and ethical challenges, from defensive medicine to managed care. Maybe the technological miracles of preceding decades were beginning to show some of their shortcomings.

By the time I started my clinical rotations, I do recall noticing that some people were becoming victims of the medical process, rather than beneficiaries. As a fourth year medical student, I remember one patient in particular who became stuck in the medico-legal limbo of the hospital system; I watched as he was robbed of the ability to make his own decisions regarding his care, after I had assured him that this sort of treatment wouldn't happen – couldn’t happen – on our medical service. Rather than dying at home or in hospice as he insisted, my patient spent his last days in the ICU, where he died not of his disease, but of multiple iatrogenic complications.

Two months later I found myself in the middle of a competitive surgical residency program, in an educational environment that valued intimidation over compassion. I was struggling to manage a surgical service of up to thirty patients, many critically ill, at a volume and intensity beyond my ability at that level of training. The pace was relentless, with a grueling 24/7 call schedule (the promised half day off every other weekend seldom happened). I was barely able to keep up, let alone gain any ground.

This was nothing like I had imagined medicine to be, and frankly I didn't see it getting any better. I looked ahead at the second year resident, then the third year, all the way up to the Chief, and they all seemed to be just as harried and miserable as I was. Even the successful staff surgeons had difficulty keeping their personal lives together.

My family had known for a while that I was disillusioned with medical training, but they couldn't imagine that I would ever quit, and were understandably dismayed as I came to my final decision. I was single at the time, however, so no one else had to deal directly with my lousy attitude, or the consequences of an abrupt, some would say catastrophic, career change.

Ironically, the ones who reacted most vociferously to the decision were my bosses on the surgical staff, including my faculty advisor and attending surgeons. My trouble keeping up with the daily workload first gained their attention, then the ire of my superiors, who suggested none too subtly that I might not be cut out for the job.

Much to their dismay, I wholeheartedly agreed. Rather than continue to put their patients at risk, I chose to resign from the training program.

I thought that would be the end of the matter, but the same staff surgeons instead persuaded me to stay on for the rest of the year, at least until I earned my medical license. By then, they reasoned, I would have enough experience to complete the program. I needed credentials. They needed a warm body to carry a pager. It was a win-win.

They may have been right, but by the end of that year I no longer had any desire to be a doctor. I walked out of the hospital feeling like I had been released from prison.

I expected to be depressed after letting go of a lifelong dream. I expected to be scared of an unknown future. Instead I was relieved – overwhelmingly so. Other than occasional panic attacks that occurred whenever a microwave oven beeped (the sound was frighteningly similar to a pager alarm), the only emotional difficulties I experienced were brief, periodic episodes of inexplicable rage. These persisted for about a year. They came out of nowhere, lasted from minutes to hours, then vanished completely. Today I assume they were expressions of some version of post-traumatic stress disorder.

Of course finances were an ever-present concern (the proverbial Starving Artist is a caricature based in reality), and the dream of doctor’s salary vanished with my white coat and scrubs.

When I left medical training in 1986, I had $1200 in the bank, and still owed around $15,000 in educational loans. (Fortunately I had paid for college year-to year, and entered medical school debt-free.)

I thought about working emergency rooms or locum tenens to pay off my loans, but quickly realized that I no longer had any inclination to see patients, and not nearly enough experience to do the job well. Medicine was already a receding image in my past.

For a long time I had been drawing, mostly as a diversion from the stress of medical school and residency, and continued to do so while I halfheartedly looked for a job. Eventually the diversion became a habit, and the habit slowly grew into a business.

It was often a struggle, but I was able to keep up with my loan payments (most of the time), and learned to pay ahead whenever a lucrative art show or a big commercial contract produced a windfall. Still, it took fifteen years to finally retire the debt, almost entirely with income from selling art. During that time I maintained my medical license, though I never practiced again. Ironically, I relinquished the license shortly after making my last loan payment.

Have I ever regretted my decision? Not once. Some people may voice their disapproval from time to time, but their concerns are far outweighed by the encouragement of others (doctors among them) who have celebrated and encouraged my various artistic endeavors. I wanted to be a doctor, then I didn’t want to be one. Simple as that.

Nothing was wasted. My academic background is evident in my artwork: the discipline, the data, the passion and the humor that were once focused on patient care, now appear in each of my drawings. So there is really no reason to look back, except to smile.

Today I continue to make my living as a full time artist, creating a signature style of visual humor and distributing my pictures to a global audience. It has been pointed out that after nearly thirty years of drawing, my artwork has positively impacted far more people than I ever could have reached in a medical practice.

I seldom give advice to students with medical aspirations, but when I do, I tell them to think of all the other things they can possibly do to make a living. Then I encourage them to try out half a dozen of them. After that, if you absolutely cannot imagine yourself not wearing a white coat, then go for it.

Above all, I tell students take a few business courses in undergraduate school. Medical practice is and always has been a practical game of profit and loss, and you won't learn that until far too late in your educational journey.

Medical school will wait for you. Get some real-world experience under your belt before you step on that treadmill. (It never hurts to have a few non-medical interests to fall back on – just in case.)

Don Stewart is an artist, writer, and creative consultant. His drawings can be seen at DSArt. Read his autobiography, Past Medical History.