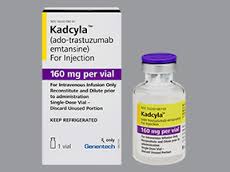 What is Kadcyla used for

Kadcyla can be used by itself in patients with HER2+ metastatic breast cancer if patients have previously received trastuzumab and taxane therapy. Patients should either have already received therapy for metastatic disease (spread beyond the breast/lymph nodes), or have an early-stage cancer that recurred within 6 months of completing primary (adjuvant) therapy.

How well does Kadcyla work

Safety and efficacy of Kadcyla versus previously standard treatment (Tykerb + Xeloda) was evaluated in the EMILIA trial with 991 HER2+ patients. It found:

What is the dosage of Kadcyla

Kadcyla is supplied as sterile, preservative free powder in 100 mg or 160 mg single-use vials. It is dissolved in sterile water for injection and the dose is diluted into 250 mL 0.9% NaCl for administration. Dextrose should not be used.

Dosing is 3.6 mg/kg administered through IV infusion over 30-90 minutes once every 3 weeks.

What are the side effects of Kadcyla

No formal Kadcyla drug-drug interaction studies have been conducted. Certain drugs that decrease the breakdown of DM1 in the liver may increase DM1 to toxic levels in the blood. Drugs that should be avoided include: ketoconazole, itraconazole, clarithromycin, atazanavir, indinavir, nefazodone, nelfinavir, ritonavir, saquinavir, telithromycin, and voriconazole.

What is the price of Kadcyla

How to obtain prescription cost assistance for Kadcyla

The material on this site is for information only and is not a substitute for medical advice, diagnosis or treatment provided by a qualified healthcare provider.

Get discovered online while contributing to healthcare knowledge by joining and publishing an article.